June 14, 2015
Oracle India had organized a Java Bloggers meet on 13th Jun 2015, at their office at Hyderabad on the occasion of Java completing 20 years. I was also invited to the event which is very exciting for me. I am on cloud nine when I got invited for the event.

Oracle India had celebrated the event by organizing speeches by Sanket Atal - Group Vice President, R&D, Harshad Oak - Java Champion and Oracle ACE Director, and a live demonstration by Debraj Dutta, of a Bot-So a robot designed by Edifixio India and is based on IoT and fully developed using Java 8 features like streams for concurrency.

Event started by Vandana Shenoy - Director Corporate Communications , by giving a small introduction about the event and a formal introduction of the speakers.


Sanket Atal
The presentation by him is more like a discussion. We have discussed and have fun question answers, quiz in between it. Below are the points he discussed:

Harshak Oak
He had started his presentation or more a talk with the introduction of Java birth and then he turns to his career that how he had chosen Java as his career. He had compared Java with Bollywood actor - Shahrukh Khan, as welcoming the guys with open hands. Some of the points he covered:

Debraj Dutta - Edifixio India
Edifixio India represents the robot they have developed based on Java and IoT. They have won the open challenge on IoT in 2014 organized by Oracle. Below are the commands/things that Bot-So, the name given to their robot follows:
At the end of the event Java Cake was cut by Sanket Atal. 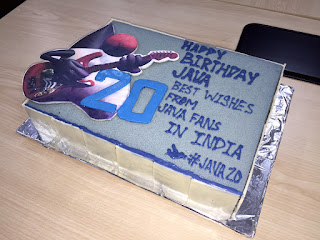 We have also have some video bytes where all bloggers have their thoughts on Java and its future.
Below is the group photograph at end of the event 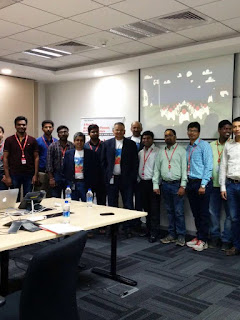 In all, it is great event to attend and love to attend the same in future. I had learned a lot from it and a lot of inspiration thoughts from great leader Harshad Oak.

Thanks for reading this blog. Comments are welcome :)

Popular posts from this blog

December 03, 2019
In this article, we will be going to see how we can achieve the HTTPS in the spring boot application . You will get lots of items on how to use the self-generated certificate with Spring Boot. But today we are going to use the CA generated certificates with the Spring Boot so that our application will work on HTTPS. We need the following things to work: CA certificates including, private key and certificate. In this article, we are using the GoDaddy wild card certificate. Spring Boot application OpenSSL library Convert the certificate and private key to PKCS 12 First of all, we need to convert the CA certificate to .p12 format . We need to have OpenSSL on the system to work with command. Also, we need to have all files in the same directory where we are running this command. The command required to covert the same: openssl pkcs12 -export -in [ceritificate-name] -inkey [private-key] -name [host] -out [new-file.p12] Here replace the values: [ceritificate-name] with
1 comment
Read more

Getting height and width of image in Java

April 16, 2010
Yesterday I was working on something that requires manipulation of image for getting its properties. After searching over the internet I found a very intersting class on Java i.e ImageIO and BufferedImage class. These classes are good enough to manipulate images. there are many other claases also. But what I need i got it from these. I found many developers searching over internet for getting properties of image and there is no good small example for that. Thats why I thought why not creating a simple code to manipulate the image and help the developers. Here is the small code that helps to get the height and width of the image. Enjoy it!! import java.awt.image.BufferedImage; import java.io.File; import java.io.IOException; import javax.imageio.ImageIO; public class GetImage { public static void main(String[] args) { try { File f = new File("E:/Vinod/Docs/Pics/krishna_01.jpg"); BufferedImage image = ImageIO.read(f); int height = image.getHeight(); in
13 comments
Read more